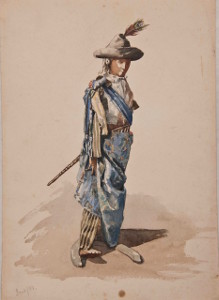 Our Yankee Doodle sailed for Tyne
...a seeker; never phony
He posed peacockeye on his hat
...to wink at Macaroni.

(Note: “Macaroni” is an 18th century term for a well-traveled dandy, one adopting the fashions, manners and customs of the countries he has visited.)
If we are to trust the Homer canon that, "In his own way, Homer is in effect telling us that we should scrutinize his art for the revelations of his life, the expressions of his innermost feelings and ideas," then how are we to decipher the satirical enigma of this quixotically-draped, sword-bearing, shadow-casting, one-legged mannequin on a stand with a peacock feather thrusting boldly forward from the punched-in hat crown? Securely pencil-dated "Jan 1 / '81", this non-regulation captain Yankee Doodle may well have metamorphosed from the drapery model for Promenade on the Beach, the 1880 oil itself one of Homer's most notably enigmatic works: de facto his first great period’s definitive great oil. (Hendricks illustrates a similarly draped mannequin, one of several found in Homer’s Prout’s Neck studio.) This Yankee Doodle mannequin can also be perceived to bear a curious symbiotic relationship to the message-bearing aide-de-camp in Officers at Camp Benton, who, half at-ease, patiently holds and awaits return of his smartly executed, yet behind the officers’ backs, salute. In a rare acquiescence to a commissioned oil (completed prior to his departure for England on the Ides of March, 1881), Homer facetiously reanimated a period Civil War photograph: the obligation fulfilled by his first great period’s tail-end oil on canvas.
Often fiddling with the enigmatic, a credible practitioner of his generation’s sense of ironic wit, Winslow Homer was a man most assuredly in possession of self. Dyed-in-the-wool Yankee, artistically home-schooled and essentially self-taught, he abhorred the thought of an autobiography and spurned all trappings of the macaroni. Perhaps for these reasons, or for others unknown, our Yankee artist left no bona fide self-portrait---he remains an enigma. Climactically, this mannequin, this seemingly introspective, yet playful Yankee Doodle portrayal---apperceived as a reactionary psychological self-portrait---encrypts an artful rebuttal to his critics, with whom he was reportedly thoroughly fed-up. And Homer was likely a functioning alcoholic; and here in this highly iconic work, his penchant for symbolism, about which much has been written, seems daringly on display. Given the January 1, 1881 New Year’s date, and in light of Homer’s upcoming March 15, 1881 departure for England, a celebratory peacock feather, familiar symbol for renewal and exuberance, seems apropos: a priori, this mannequin’s inscrutable "declaration" signals the impending fresh start and stands as the last dated watercolor of our Yankee artist's first great watercolor period (Jun. 1873 - Jan. 1, 1881).