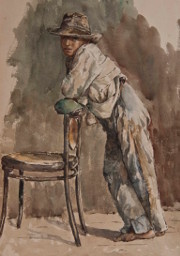 The Huck Finn-like character in this study invites comparison with the “egg hunter” featured in Homer’s 1873 Gloucester watercolor How Many Eggs?. While both works appear to be immediate and from life, the latter is a brightly-finished composition suitable for exhibition, the former an unconventional portrait study. His garments hang with apt consistency; well balanced tonal gradations capture the muddied, workman-like outfit which marks him as a fisher boy or wharf hand, many of whom were Gloucester-Portuguese. The requested pose combined with a rather challenging gaze returned directly to the viewer leaves the viewer guessing – itself a recurring element in Homer’s often enigmatic non-narratives. And a not-so-minor detail, at the foot of his own shadow, observe the fisher boy’s singularly translucent big toenail.
Author/critic Adam Gopnik (The New Yorker magazine, 10-31-05) references an MMA exhibition-catalog essay by Albert Ten Eyck Gardner which enumerates as among the elements of Homer's mature style his "appetite for the isolated figure, the search for truth of pose even at the price of obvious grace, the love of aberrant perspectives," and "the marriage of sharp observation and decorative patterning." Finally, Homer liked to reward the observant viewer: note the fisher boy’s crimson daub suspender clips, and even better, his well-worn fedora - a painting in itself.